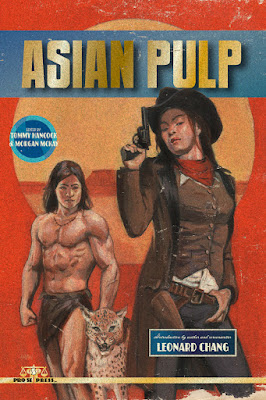 In April 2013, Pro Se Productions released ‘Black Pulp’, a collection of stories written in classic pulp genres featuring lead characters of African descent. Not only were readers captivated by the cast of characters featured in the book, they also saw the potential of future volumes, both of ‘Black Pulp’, and collections featuring other ethnicities in much the same way. Pro Se Productions proudly announces the release of ‘Asian Pulp’, featuring seventeen of today’s best authors, in both print and digital format.

Leonard Chang, novelist and writer and co-producer of the TV crime drama ‘Justified’, states in his introduction to ‘Asian Pulp’, “The world of pulp fiction was a world that I understood—it was a reaction to trauma, both as art and as catharsis. Personal trauma. Emotional trauma. Physical trauma. National trauma. This is why I responded to it, why I immersed myself in it. And why, whenever I was in a personal and artistic crisis, it saved me. Fiction is a reflection of and commentary on life, and I needed to find a reflection of and commentary on my life.

That there weren't any Asian Americans in the pulp I was reading wasn't a problem (or if there were Asians they tended to be dismissible stereotypes) -- no, not a problem at all, but actually an opportunity. I've always viewed writing as providing myself with more reading material. I write what I can't find out there. Why not have a Korean American act as a private eye, and infuse in his character all the traits I wanted to see but haven't? Why not write about Korean American gangsters, criminals, and detectives? And this is where we, as writers, all began moving toward: writing about people we want to see on the page, in lives and stories that speak to us.”

Following in the tradition of the best selling ‘Black Pulp’, from Today's Best Authors and up and coming writers comes ‘Asian Pulp’ from Pro Se Productions! A collection of stories featuring characters of Asian origin or descent in stories that run the gamut of genre fiction! 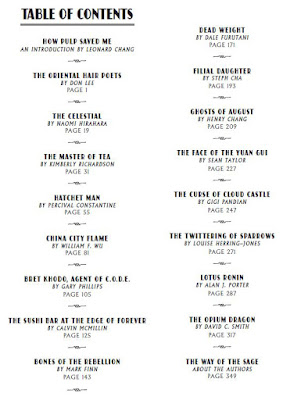 “As an author of color who writes genre fiction,” says Gigi Pandian, “I love finding books where there are diverse characters in exciting stories. Ever since I was a kid, I’ve loved reading mystery and adventure stories, but characters in the types of stories I enjoy rarely reflect my own ethnic heritage or the diversity around me (my father is an immigrant from India, and I grew up in California). When I became a writer, I naturally created characters that were part of my own life experience. I enjoyed ‘Black Pulp’, so it was an honor to be invited to contribute a story for this new anthology. ‘Black Pulp’ was first and foremost a great collection of fiction--but I also loved how black writers and characters were brought into the spotlight. I hope ‘Asian Pulp’ does the same thing for Asian writers and characters.”

Mysteries, westerns, stories of crime and noir, and more, all with Asian characters in the lead! Between these covers are 17 tales of action, adventure, and thrills featuring heroes and heroines of a different shade that will appeal to audiences everywhere. ‘Asian Pulp’. From Pro Se Productions.

Featuring a fantastic, evocative cover by Adam Shaw and logo design and print formatting by Sean Ali, ‘Asian Pulp’ is available now at Amazon and Pro Se’s own store for $20.00.

This historic collection of authors and tales is also available as an Ebook, designed and formatted by Forrest Bryant and available for only $4.99 for the Kindle and for most digital formats via Smashwords.

To request digital copies for review, to interview authors, or for further information on this title, contact Morgan McKay, Pro Se’s Director of Corporate Operations, at directorofcorporateoperations@prose-press.com.

Details about "The Curse of Cloud Castle," pulled from an interview with Pro Se Productions.


“The Curse of Cloud Castle”,” says Pandian, “is a mystery featuring Sanjay Rai, an Indian-American stage magician who performs as The Hindi Houdini. Sanjay is invited to perform his show at an old friend’s birthday party on a supposedly haunted island off the coast of California, and “the curse of cloud castle” plays out when one of the guests is murdered. But is the culprit a ghost, or an ingenious person who has pulled off the perfect crime?

The story is a locked-room mystery, a story where the reader is given all of the clues in a puzzle plot mystery to solve a seemingly impossible crime. It’s a type of story that was especially popular during the Golden Age of detective fiction during the 1920s and ‘30s, and since it’s my favorite type of mystery, I’m doing my part to help bring it back.”

I attended my first ALA last week. The American Library Association convention took place in San Francisco this year, giving me a great introduction to the amazing event. With my author hat, I signed books for librarians; with my reader hat, I took in the huge (and I mean HUGE) gathering of librarians and book-lovers.

The Sisters in Crime booth

Sisters in Crime is an organization that does so much for its members and for the mystery genre as a whole. (Here's a brief history of SinC.) One of their programs is "We Love Libraries," in which they give $1,000 to a library each month. So it's no surprise that each year at ALA they sponsor a booth where members can sign books. Big thanks to SinC Library Liaison Cari Dubiel for coordinating this year's table, and to all the volunteers who worked at the table to promote SinC and its authors.

Henery Press donated copies of Quicksand that I signed at the Sisters in Crime booth, and Midnight Ink donated copies of The Accidental Alchemist for me to sign at the Llewellyn booth. Unlike bookstore signings where event attendees are already familiar with an author, ALA signings provide a wonderful opportunity for librarians to discover new authors. It was a lot of fun to talk about books with avid readers and librarians who are passionate about what they do. 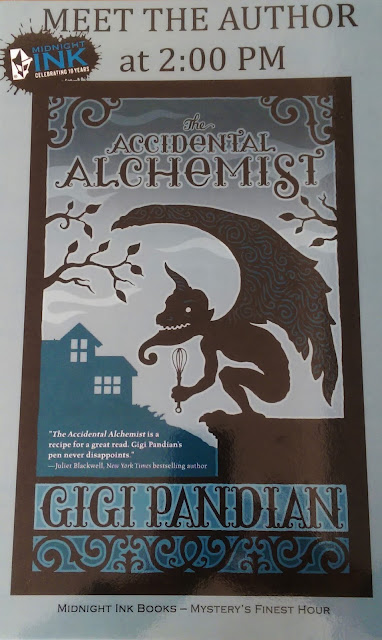 Between my signings there was time to explore the exhibits. I learned that it's not only specialty library services vendors who exhibit at ALA, but pretty much anything book-related is welcome -- so there were plenty of fun surprises at every turn.


Look who I found at ALA: artist Jennie Hinchcliff! I adore her mail art and books. Simply seeing her briefly made me want to send more hand-written letters.