On this week's President's Day holiday, I attended Self-Publishing Boot Camp in San Francisco. I've already done a significant amount of research into the best ways to publish my books myself, but aside from attending an ebook panel put on my my local Sisters in Crime chapter, my research has primarily been online. Since I'm publishing Artifact: A Jaya Jones Treasure Hunt Mystery in both ebook and print formats, I wanted to hear and speak with people in person to fill in the gaps in my research.

The workshop was led by Carla King, who has been self-publishing since 1994. I heard about it through one of the speakers, Joel Friedlander, aka The Book Designer, who has a terrific blog about making the right choices if you're going to publish your books yourself. Even though I already knew a lot of what was covered that day, successfully publishing your books yourself is such a big undertaking that I still learned a lot.

My top 5 take-aways from the day:

1. It's the Wild West out there in publishing right now.

Whatever is true today might be totally different three months from now. While I already knew that, what I realized at the workshop was that the great thing about this uncertainty is that it's also an exciting time to experiment. When you're publishing independently, you can learn new things and change course at any time. Try what you think is best right now. If it turns out it's not working out as you expected, try something else.

I'm letting go of the idea that I need to get everything right. I'm learning as much as I can, having some fun, and I'll see where that leads.

2. Once you've decided to go the indie route, what do you do first? Set goals. Specific ones.

Ask yourself what you want out of publishing your book(s). Once you figure that out, that's when you'll be ready to think about strategy.

My own goal is to have fun writing a whole mystery series. I'm in this for the long haul, so I need it to stay fun and not use up all of my energy. Otherwise it won't be worth it to me to stick with it. Therefore I'm not going to spend time doing things I don't enjoy. For example, I decided I'm going to pay someone to do my ebook formatting, because that expense is more than worth it to further my personal publishing goal. But if my goal had been to maximize profits as much as possible so I could quit my day job, paying someone to do something I could learn to do myself wouldn't necessarily be a good strategy.

3. The stigma of self-publishing is fading, but you still need to package your book in a way that looks professional and appropriate to your genre.

People do judge a book by its cover. But it's not enough to simply have something you think is beautiful. Study book covers in Amazon's Top 100 lists in your genre.

As graphic designer, I've been having fun playing with cover design options. Some of my ideas have been really fun, but I realized how important it is to stick with genre conventions. I'm going to have a cover I love, but it's also going to be one that immediately tells my audience this book is for them.

4. Decide which parts of the process you need help with. No, you can't do it alone.

Through ebooks and print-on-demand technology, publishing independently has become less expensive, but it's still not free—not if you want to do it well.

Does your book need an editor? Unless you have the world's greatest critique group, the answer is yes. Do you need a book cover designer? Unless you're a designer or have an eye for design, the answer is yes. Do you need someone to format the interior of your book? Maybe, maybe not; it depends how much time you want to spend learning how to do it. Do you want to buy your own ISBN numbers? Do you want to print copies of your book to give away? The list goes on—and I'll talk more about my own specific decisions in a future post (which I'll write just as soon as I'm done with my own book design!).

5. Build your author brand. Not a book, not a cute handle, but YOU.

People who've promoted themselves as clever names that aren't their own often regret it later. Carla King gave the example of herself. On Twitter and in some other places, she's MissAdventuring. Cute, but many people won't remember MissAdventuring is Carla King.

And unless you're planning on writing just one book, you don't want your identity to be completely tied up with your first book. Some people use their book covers as their social media image, but a head shot of yourself that you use everywhere will allow a better connection to your readers.

I had been debating how much to use my "Gargoyle Girl" brand. I'm still going to use it for my business name and my mysterious photography blog, but I'm not going to use it in place of my name. I had previously wondered if I should Tweet as Gargoyle Girl, but I'm glad I stuck with @GigiPandian.

Before the workshop, I'd been suffering from a bit of information overload. But now that I've thought more seriously about my goals—to have fun writing the Jaya Jones Treasure Hunt Mystery Series along with some locked room mystery short stories, connect with readers and other writers, and to structure my life in a way that allows me to keep writing—I'm back to having fun with this crazy undertaking.

I love it when I have weekends this fun and productive. After an inspiring lunch with several writer friends who kicked my butt into gear to be productive, I finished designing a website for Gargoyle Girl Productions. 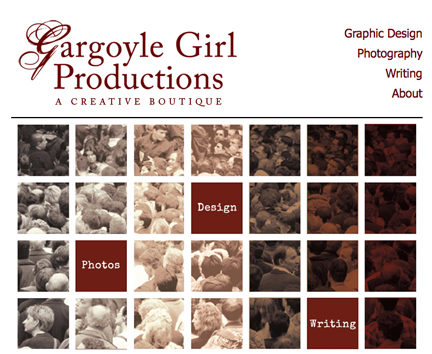 I've still got some kinks to work out, but I'm happy that I finally got it up! It makes this whole venture seem much more real.

—Gigi
Posted by Gigi Pandian at Sunday, February 12, 2012 No comments:

10 Things I Wish I'd Known About Wigs Before Starting Chemotherapy

I'm one of those people who's good at staying positive. But when I learned that in addition to having cancer I had to go through chemotherapy and lose my hair, I wasn't happy. It turned out I was needn't have worried. It wasn't nearly as bad as I thought it would be. There was even some fun to be had.

Since I've been going through this experience, a lot of people have asked me all sorts of questions about wigs. Six months ago, I knew nothing about wigs. Now I've learned so much that I thought I'd share everything I wish I'd known when I began the process.

Here are the ten things I wish I'd known about wigs before starting chemo:

1. You don't need to spend a fortune to buy a wig everyone thinks is real.

Wigs made of real hair, which are more expensive, seem to last longer than synthetic ones. But inexpensive wigs can look just as good. I was worried I'd have to invest in a super-expensive wig to feel comfortable leaving the house, but that didn't turn out to be the case at all. What do you think? Can you tell which is real? 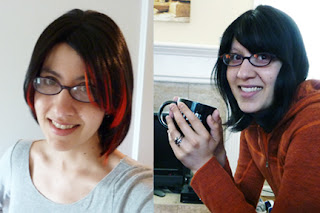 2. The cost of buying wigs.

Some insurance covers the cost of a good wig if you have to have chemotherapy. The American Cancer Society also offers a free wig to cancer patients, that you can select in person at your local office. Beauty stores offer a range of wigs. My wigs cost between $35 and $250. My favorite cost $60.

3. What to expect at the wig store.

I bought my wigs at beauty stores, which stock lots of wigs and have knowledgeable saleswomen. You'll need to wear a nylon stocking cap when you try on wigs, and all the stores I visited charged around $2 for the wig cap. Many beauticians can also trim your wig so it better fits your face. 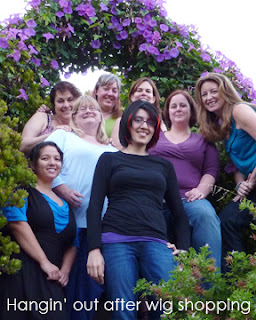 4. Take your friends with you when you go wig shopping.

Taking your friends with you is great to turn the experience of temporarily losing your hair into something fun. It also has the added bonus of letting your friends pick things out that you'd never select for yourself. My friends were so right!

I initially imagined it would be necessary to get a custom-made wig, or at least to measure my head to get the right size. I learned that neither was necessary. Wigs have sizing straps so that you can adjust the size on your head. There are also cut-outs that fall above your ears to make it easy to put the wig on straight. Not all wigs will fit you, though, so you'll still need to try them on.

6. How to get a comfortable fit.

That stocking cap you used at the store to try on wigs can help if your scalp is sensitive and the wig feels itchy. I didn't find that to be the case most of the time, but it was nice to have some nylon stocking caps when I wanted one. I was also given a silicone wig strap that was meant to keep a wig in place, but it didn't work well with my glasses. That didn't turn out to be a problem either. If you've correctly used those sizing straps on the inside of the wig, the wig doesn't move at all throughout the day. (I live in California, though, so I haven't tested this in bad weather conditions.)

7. If your doctor says you'll lose your hair, go ahead and cut it short before that happens.

Having short hair will make it less traumatic as your hair thins. It also lets you try out short hair styles so you can see what you might like to do while your hair grows back out. I tried out two lengths of short hair. Surprisingly, super-short looked pretty damn good. 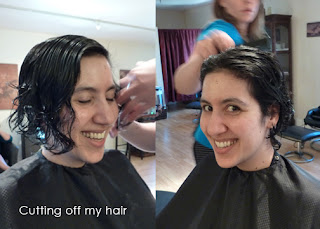 You're going to need to wash your wig, so even as a practical matter it's a good idea to have more than one. Some wigs will also become worn around the edges (I found it to be the less expensive ones), and it's much easier to purchase an extra wig before you start feeling poorly. And the biggest reason to buy more than one wig? To have fun with the experience. 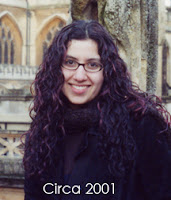 9. Yes, you want to have some fun with your wigs.

I had the same long curly hair for twenty years, from age 16 to 36. It worked for me, so I had no reason to change it. I only changed because I was forced to do so. But now I know I don't have to keep that style to feel like myself.

Regardless of what anyone else says, you'll know when you've found the wigs you feel happy with. I tried on some wigs that might have technically looked good on me, but they didn't feel right. I got the ones I loved, and that's one of the reasons this challenging year has gone by as quickly as it has.