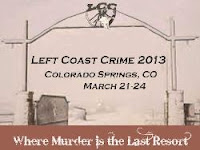 After nearly getting snowed in, I'm back from Colorado Springs, where I attended the Left Coast Crime mystery convention. I've been attending mystery conventions for a few years now, and it's always inspiring to hang out with fellow mystery writers and readers. It's especially cool this year to have a book out, because I got to meet readers who've enjoyed Artifact. So much fun!

Here are some highlights:

The New Author Breakfast. Author Mike Befeler generously runs the author breakfasts, where new and established authors talk to readers about their latest books. At the New Author Breakfast, Mike introduced the roughly twenty debut authors in attendance. On California time, it's always a bit of a challenge to get up for 7:30 a.m. breakfasts, so I'm not sure how coherent I was when talking about Artifact, but I discovered lots of new writers I want to check out!


A Concealed Weapons Fashion Show. This was such a fun idea. A group of writers dressed up as mystery characters and walked down the catwalk. The audience was supposed to guess where they were hiding weapons, then the participants pulled out their hidden weapons.

Panels and Pals. We had a great group on the Occupations to Die For panel. Tammy Kaehler writes about a race car driver, Ellen Byerrum is a reporter and writes about one, Patricia Wood has an FBI agent character, and Naomi Hirahara writes about a Japanese-American gardener plus has a new series coming out with a 22-year-old female bicycle cop. This was one of those panels where we could have gone on and on chatting about how our various characters solve mysteries.

Here's Susan Shea with Terry Shames, both pals from my Northern California Sisters in Crime chapter, at the SinC table in the book room. Susan moderated the other panel I was on, Literary Inspirations for Traditional Mysteries. Any time I get to talk about the Golden Age of detective fiction is a good time!


One of the reasons I love attending conventions is because it's possible to make the most wonderful connections that never would never happen if we all stayed in our writing cubby holes. I met author Deb Ledford when she and I were on a panel together last year. Here's Deb with my NorCal pal Mysti Berry.

Author Interviews. One of the guests of honor at the convention was author Craig Johnson, who writes the Longmire mystery series that's now an A&E TV show. Lou Diamond Phillips is a big fan of the books, so he asked to audition for the TV show (he plays Henry Standing Bear). His flight was delayed for most of the day due to the snow storm, but he stuck it out so he could be there to do the interview with Craig Johnson.

Fan Guest of Honor. Tom Schantz of Rue Morgue Press was the fan guest of honor. Rue Morgue Press (which takes its name from the Edgar Allan Poe story that's credited with being the first mystery story) brings classic mystery novels back into print. Since I love reading Golden Age mysteries, I think it's so cool that they do this.

The book room. My bag was much heavier when I left Colorado, because it was stuffed full of books. Don and Jenn from Scene of the Crime, booksellers in the book room, have been really supportive of me as a new author — and they also tempt me with lots of books I want to buy... Here they are with Ingrid Willis, who's organizing Bouchercon 2014 in Long Beach, California.

Getting outside. Though it's tempting to feel like you're missing out back at the convention hotel, taking short breaks is essential. I spent a couple of hours with Mysti Berry at the Garden of the Gods.

Snow! On Saturday, a big storm blew in. I was relieved I'd gone on an excursion the day before and that my flight wasn't until the following day. 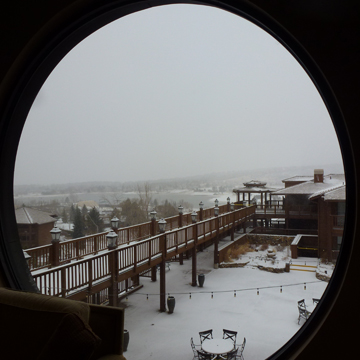 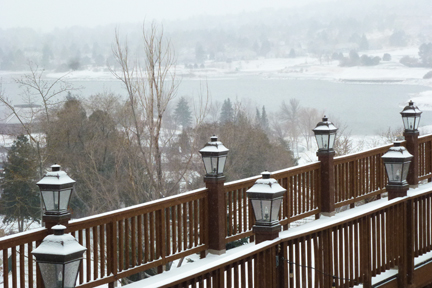 Attendees voted for the Left Coast Crime awards. Winners were announced at the banquet:

Lastly, here's Toby and Bill Gottfried at the table with information about next year's Left Coast Crime. "Calamari Crime" takes place in Monterey, California, March 20 - 23, 2014. I'll be there!

Revisions inevitably take longer than anticipated. For me, it tends to take me about twice as long as I estimate. Since I've learned a thing or two over the last few years, I doubled the time I thought I needed to finish revising Pirate Vishnu: A Jaya Jones Treasure Hunt Mystery.

It worked! I made my deadline!

I sent off the manuscript to my copy editor over the weekend. Advance Reader Copies will be out in May, and the novel will be published September 3, 2013.

Later this week I'm heading to Colorado Springs for Left Coast Crime. I'll be on two panels at the mystery convention. If you'll be there, please find me and say hello!

Here's a tiny teaser of the new book I just turned in. More details will follow in April, along with the book cover.

Historian Jaya Jones has her work cut out for her.
Posted by Gigi Pandian at Monday, March 18, 2013 No comments: