The Accidental Alchemist: a gorgeous book cover, plus Alchemist mugs

My next book, The Accidental Alchemist, comes out in January, 2015. This month, the fun has already begun -- check out the gorgeous book cover!

The Accidental Alchemist is the first book in a new series, and I'm working with a new publisher (Midnight Ink), so I didn't know what to expect. Therefore I was absolutely thrilled when they hired one of my favorite illustrators (Hugh D'Andrade) to design the cover. Isn't it awesome? 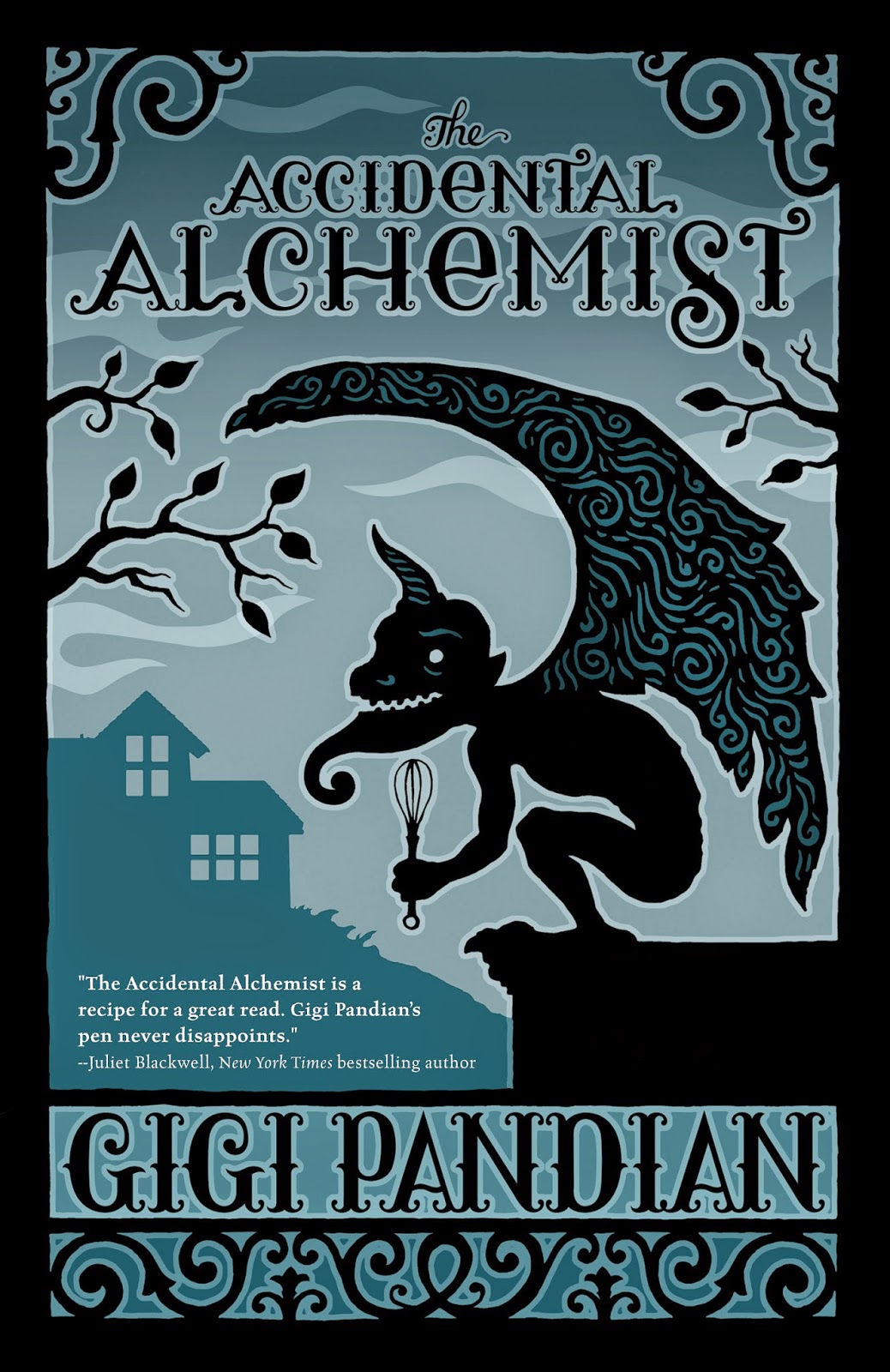 When Zoe Faust—herbalist, alchemist, and recent transplant to Portland, Oregon—begins unpacking her bags, she can't help but notice she's picked up a stow away: a living, breathing, three-and-half-foot gargoyle. Dorian Robert-Houdin is no simple automaton, nor is he a homunculus; in fact, he needs Zoe's help to decipher a centuries-old text that explains exactly what he is. Zoe, who's trying to put her alchemical life behind her, isn't so sure she can help. But after a murder victim is discovered on her front porch, Zoe realized she's tangled up in ancient intrigue that can't be ignored. Includes recipes!

I was so excited to see the beautifully illustrated cover that I knew I had to do something cool with it. The book is now available to pre-order, so I decided to make mugs -- and give everyone who orders the book a chance to win one! 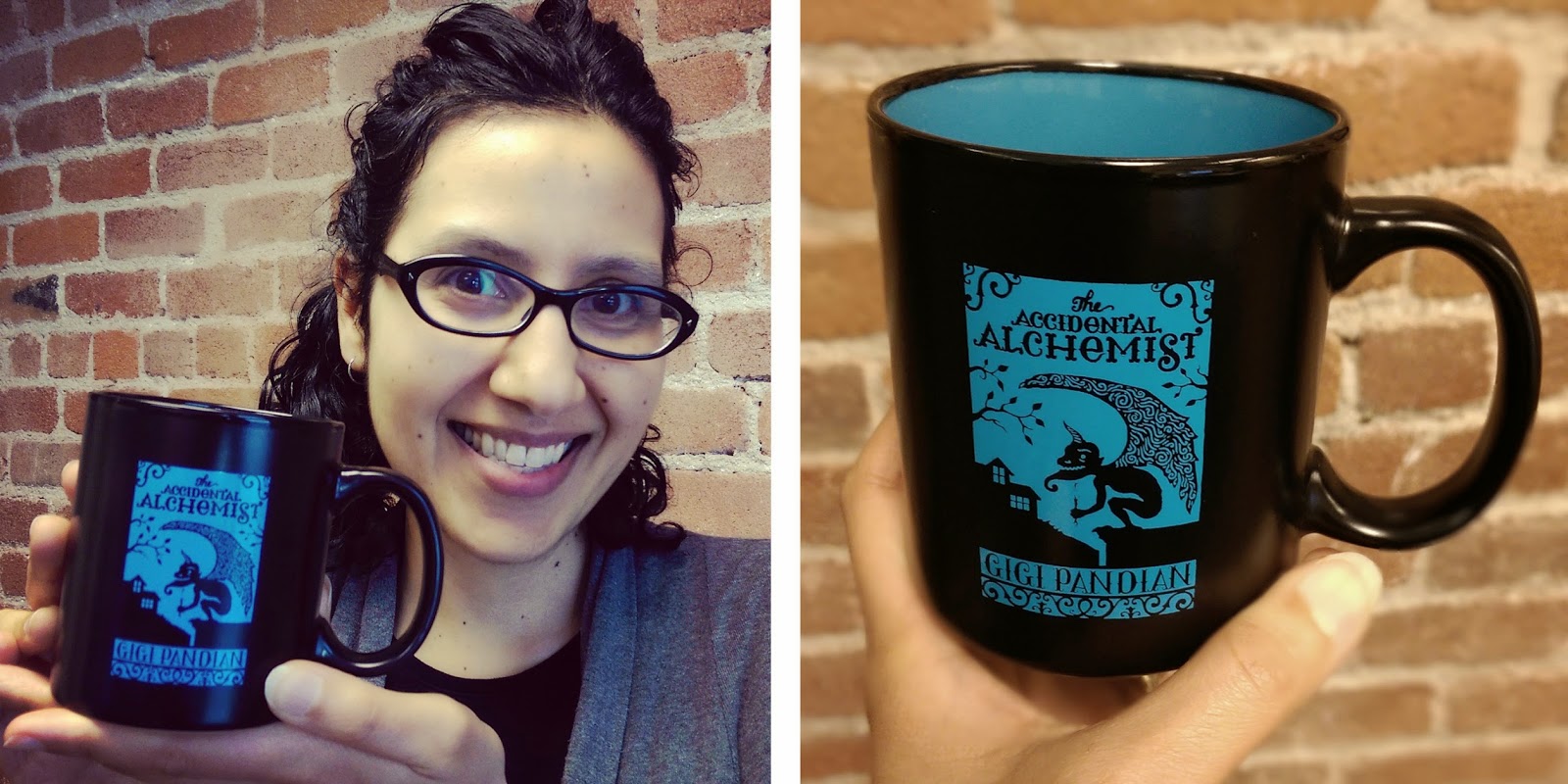 Each month from now until the end of the year, I’m giving away a mug to someone who has pre-ordered the book. Yup, the earlier you order the book, the more chances you’ll have to win. Simply email me at gigi [at] gigipandian.com to let me know you’ve ordered The Accidental Alchemist, and you’re entered to win a mug.

Book Events: Much Better With Friends!

When I decided to throw myself into my writing after the whole stupid cancer thing got my priorities in order, I made a promise to myself that I'd keep it fun, rather than get stressed out by things beyond my control. One of the things authors often worry about is whether or not people will show up for their book signings. Well, I've got a secret to make sure people show up: I do joint events with author pals! It's a great excuse to hang out with friends, and it often brings in a larger group of people to the bookstore.

Last week, I had two such events. First stop, Borderlands Books in San Francisco with Juliet Blackwell and Kate Carlisle. It was an added celebration that day, because Juliet had just hit the New York Times bestseller list with her new book, Vision in Velvet.

Next stop, Village House of Books in Los Gatos with Sophie Littlefield and Rachael Herron. I'd never been to this bookstore before, but it was just about the cutest store I'd ever visited. It's in a former cottage, so it has a cozy feel, and the owners make great use of space. There's even a treasure chest full of flowers out front.

1. My locked room mystery story "The Hindi Houdini" has been nominated for a Macavity Award! The award is given out by Mystery Readers International at the Bouchercon mystery convention in October.

This is the short story that appears in Fish Nets: The Second Guppy Anthology, and was nominated for an Agatha Award earlier this year. In “The Hindi Houdini,” magician Sanjay Rai, aka The Hindi Houdini, solves a locked room mystery at the Napa Valley winery theater where he performs.

2. "The Haunted Room," a Jaya Jones locked room mystery story, will appear in the Bouchercon 2014 Anthology.

If you subscribe to my email newsletter, you got a sneak peak of an earlier version of "The Haunted Room."

The Bouchercon 2014 anthology will include stories by:

Plus Guests of Honor:

Thank you to everyone who congratulated me on social media over the last couple of weeks! I always thought I was rather old fashioned because of my love of impossible crime stories that were quite popular during the Golden Age of Detective Fiction, so it's really fun to see that people are enjoying my locked room mysteries.