UPDATE: Pirate Vishnu was acquired by Henery Press in a three book deal for the Jaya Jones Treasure Hunt Mystery Series. Along with a new cover design, the release date is being pushed back a few months, until early 2014. I'm thrilled to have such a great publisher backing the series!


My second Jaya Jones novel comes out September 3, 2013. It's now four months before the book comes out, so Advance Reader Copies have arrived! Here's the cover art and details about the new book: 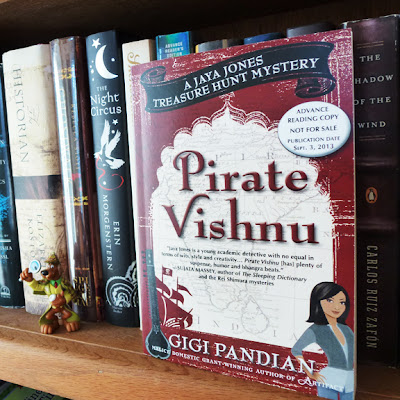 Historian Jaya Jones has her work cut out for her.

1906. Shortly before the Great San Francisco Earthquake, Pirate Vishnu strikes the San Francisco Bay. An ancestor of Jaya's who immigrated to the U.S. from India draws a treasure map…

PRESENT DAY. Over a century later, the cryptic treasure map remains undeciphered. From San  Francisco to the southern tip of India, Jaya pieces together her ancestor's secrets, maneuvers a  complicated love life she didn't count on, and puts herself in the path of a killer to restore a revered treasure. 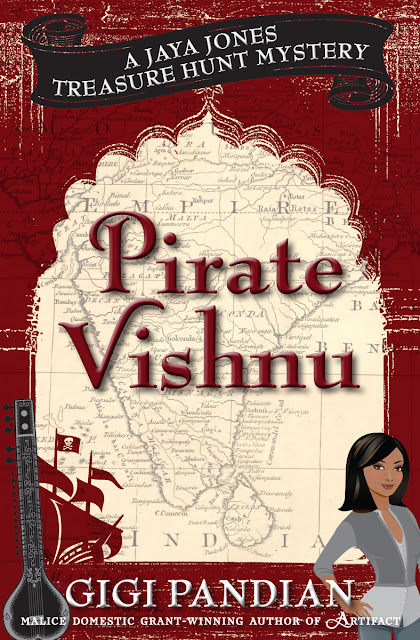 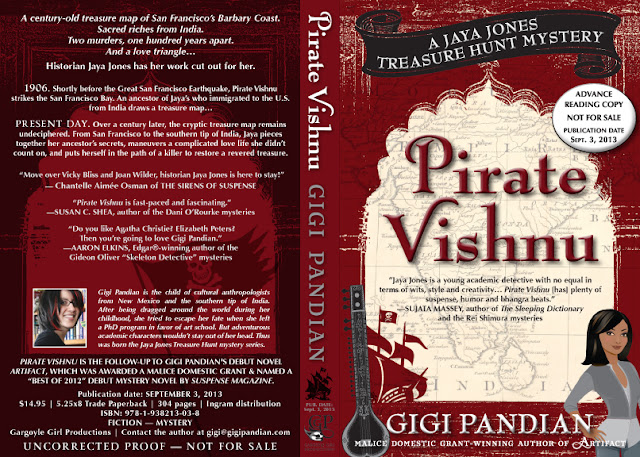 The book is available for pre-order on Amazon and more details can be found on my website.

I had so much fun writing this book that I can't wait until it comes out! It feels funny that I'm heading to Malice Domestic this week to promote Artifact, when I'm most excited about talking about Pirate Vsihnu. Don't get me wrong. I'm having a great time with Artifact out in the world. But I've been focused so intensely on the latest book that it's a bit of a challenge to switch gears!

One of my favorite things about creating a world of characters is when readers really click with what I was going for. Advance reviews are starting to come in for Pirate Vishnu, and it was such a kick to find Jaya compared to two favorite characters of mine: Vicky Bliss in the books by Elizabeth Peters, and Joan Wilder from the movie Romancing the Stone.


"Move over Vicky Bliss and Joan Wilder, historian Jaya Jones is here to stay! Mysterious maps, legendary pirates, and hidden treasure—Jaya’s latest quest is a whirlwind of adventure."
—Chantelle Aimée Osman of THE SIRENS OF SUSPENSE


I'm getting ready for the Malice Domestic mystery convention, taking place in Bethesda, MD this coming weekend. I'm on the Treasure Hunt panel on Saturday, May 4 at 3 p.m., signing at 5 p.m., and featured on the New Author Breakfast on Sunday, May 5 at 7 a.m.
Posted by Gigi Pandian at Tuesday, April 30, 2013 5 comments:

A New Short Story is Out: "The Hindi Houdini" 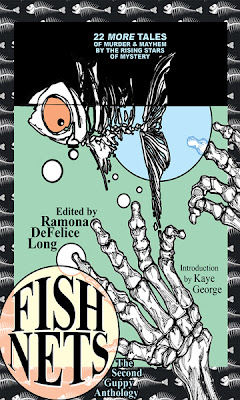 I've got a new short story out this week!

"The Hindi Houdini" appears in Fish Nets: The Second Guppy Anthology, 22 More Tales of Murder and Mayhem from the Rising Stars of Mystery, published by Wildside Press.

The anthology features stories from mystery writers in the Guppies chapter of Sisters in Crime.

If you're reading the Jaya Jones series, you'll recognize Sanjay, Jaya's best friend. A magician and escape artist, he chose the moniker "The Hindi Houdini" because it paid homage to his Indian heritage and his favorite illusionist—and because he liked the rhyme better than Hindu Houdini.

My first published short story, "The Shadow of the River," appeared in the first Guppy anthology, Fish Tales, published by Wildside Press in 2011. I had written the story well over a year before that, and I was still finding my voice as a writer. In that story, Jaya Jones is the star—but it's told from the point of view of a Watson-like side kick who narrates what Jaya is up to! It's also a locked room mystery, but a rather simple one compared to "The Hindi Houdini." Now that I've been doing this for a few years, I feel like I'm starting to find my groove.

What short story am I going to write next? I'm thinking about an art theft mystery starring another character from the Jaya Jones series, Lane Peters, based on my personal experience with an art heist at the Louvre...
Posted by Gigi Pandian at Tuesday, April 23, 2013 2 comments:

Fifteen Months After Cancer: Fearless & Feeling Like Myself Again

It's been fifteen months since I finished chemotherapy and radiation treatments.

I definitely fall into the camp that believes what doesn't destroy me makes me stronger. I continue to feel healthier than I've ever been -- thank you Kris Carr and Post Punk Kitchen! -- and am enjoying life more than ever.

Though it turns out I can pull off short hair (here I am in August of 2012), I didn't really feel like me with that hair. 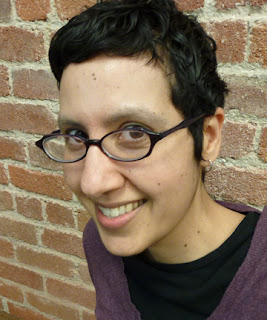 Now, though my hair isn't nearly as long as it used to be, it's long enough that it gets blown over in the wind and has a life of its own. In other words: I'm back to feeling like my hair is my own. 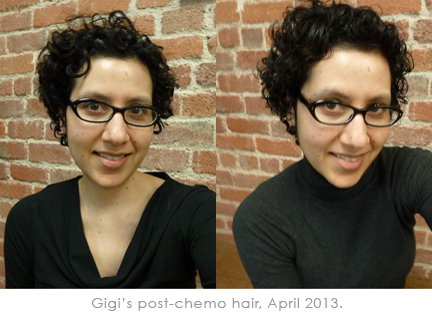 As for food, I used to take pride in the fact that I would try any dish put in front of me, a la Anthony Bordain or Andrew Zimmerman (of the Travel Channel's Bizarre Foods show), and drink any spirits no matter how high the proof (absinthe, anyone?).

After finding out that certain foods would greatly increase my risk of cancer recurrence, I realized I needed to change my eating habits. But where would I be without my identity as a fearless eater? There was no way I was going to become a boring eater. Well, it turns out there was a different way for me to be fearless with food: I learned to cook.

When I got sick, we'd recently moved into a house with an amazing kitchen. Before that, living in Berkeley and San Francisco made it easy to walk five minutes in any direction and get any type of food we desired, so there was no need to cook in cramped apartment kitchens with electric stoves. But in a gorgeous kitchen with a gas stove and plenty of counter space, I was already tempted to learn to cook.

It turned out that cooking from scratch was easier than I ever imagined. Granted, it's not fast; it's quite time consuming. But who knew that cooking could be so much fun, and that healthy foods could taste so absolutely amazing? So now instead of being someone who will try any food, I'm someone who can cook up any dish I feel like eating -- and have it be both delectable and good for me. Not too bad, as trades go.

And yes, I do all my writing in the morning so I have time for leisurely cooking in the evening.