This month, I've taken a step back from my the frantic pace I was keeping in anticipation of my first novel coming out at the end of the summer.

At the start of the year, one of my biggest resolutions was to keep writing fun. I've done a good job at sticking to that, but stress began to creep up on me as my "to do" list grew longer and longer. There's a long list of logistical set-up and an endless amount of promotion you can do for a novel. I had to take a step back and remind myself what I want to get out of writing. It's not optimizing sales. It's having fun writing good stories.

It's been almost a year since my cancer diagnosis turned my life upside down, a long enough time that it's easy to slip into old habits, such as working through lunch or stressing about getting the right reviews. But you know what? I'm no good at being stressed out. It's the antithesis of my personality. I'm done worrying about getting everything "right" with book promo. I'm back on track enjoying life's moments.

I'm still working hard, but I'm choosing to focus on things that are also fun, such as a joint writing project with two fantastic authors, and doing a photo shoot for an author pal who's updating her website. And I'm spending more time enjoying the garden (to be fair, it's the husband who does the gardening; I just keep him company and take photos of his work!). Here are a few garden photos. 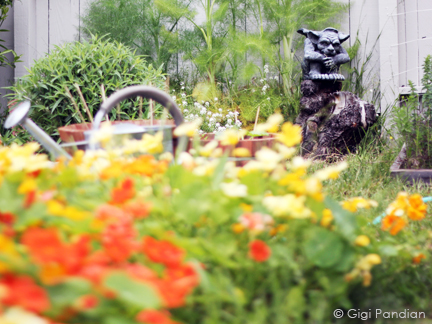 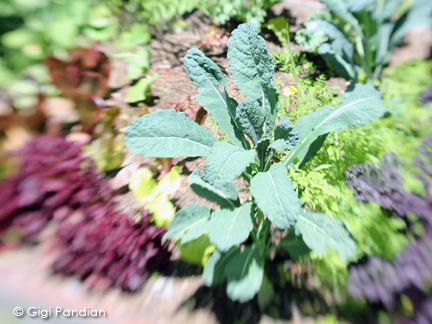 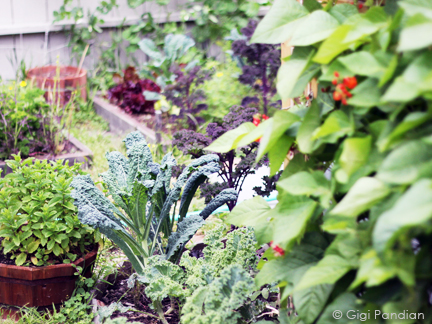 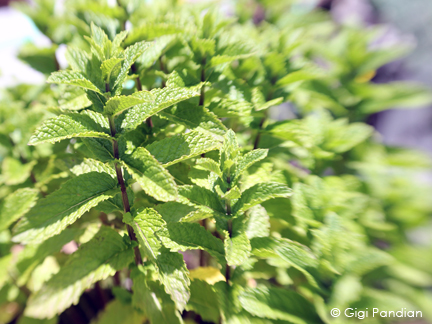 Below, my NaNoWriMo mug with a green smoothie made in part with veggies from the garden: kale and cucumber with avocado, green apple, and cacao flakes for sweetness and caffeinated kick. Yum. (Seriously, YUM.) 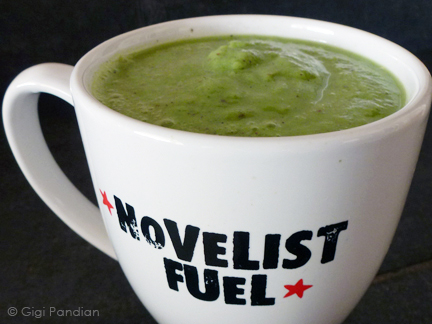 Birthday Weekend and a New Haircut

The long weekend I gave myself to celebrate my birthday is almost over, but I packed in a heck of a lot. This is looking to be a great year.

Dinner party after writing all day—check.

Happy hour with old friends at Gather in Berkeley—check.

Taking the day off on Monday to have fun and be productive—half-check. I had a great day, but didn't write much (though I solved a plot problem). I tried updating my website, but found I was in over my head with things I wanted to do beyond simple HTML (I'm thinking of switching to WordPress).

I've still got a really long list of things to do for my novel coming out in a little over three months, but I'm looking at my list in a new way. Rather than worrying about how daunting it is, I'm back to having fun with the journey.


And...I'm sporting a new haircut! I didn't believe this haircut would work on me until I listened to the sage advice to buy conditioning shampoo. Turns out curly hair needs love even when it's this short! The next time you see me, I'll look like this: 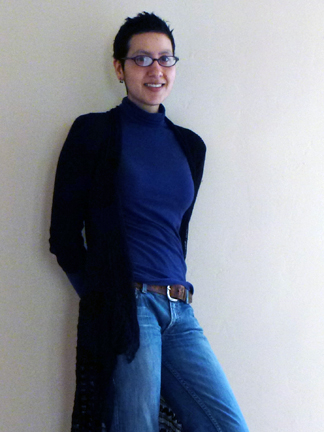 Two events this past week have gone a long way towards balancing out my crappy, cancer-filled last year. First, I met one of the two mystery authors whose books I've loved since I was a teenager. Then, I received a fantastic book blurb from the other one!

Last week, I wrote about meeting Barbara Mertz (who writes mysteries as Elizabeth Peters) at the Malice Domestic mystery convention. When I returned home, I had to pinch myself when I found a book blurb from Aaron Elkins waiting for me. 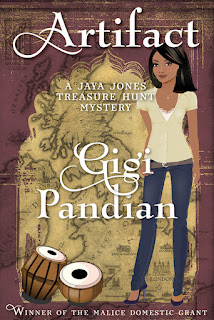 Aaron Elkins had graciously agreed to read an Advance Reader Copy of Artifact, so I knew it was a possibility that I'd receive a blurb if he liked the book. But I couldn't quite believe it when it when I read the email.


"How wonderful to see a young, new writer who harks back to the Golden Age of mystery fiction. Artifact is...witty, clever, and twisty, with a unique, easy-to-root-for protagonist in Jaya Jones...Do you like Agatha Christie? Elizabeth Peters? Then you're going to love Gigi Pandian."
—AARON ELKINS, Edgar®-winning author of the Gideon Oliver "Skeleton Detective" mysteries


Now, for those of you who haven't read any mystery novels by Elizabeth Peters or Aaron Elkins, let me give a brief overview, since you're definitely missing out. There are lots of other fabulous mystery writers out there (such as one of my current favorites, Daniel Stashower, who writes a great series about Harry Houdini among other things), but there's nothing quite like the books we discovered while growing up, is there?

Both Elizabeth Peters and Aaron Elkins write adventure mysteries with American (and sometimes British) academics solving mysteries abroad, usually involving a historical mystery linked to a present day crime. These aren't thrillers, but rather are puzzle mysteries in the tradition of Agatha Christie, full of characters easy to fall in love with. I love this stuff, which is why I decided to write it.

Elizabeth Peters is best known for the humorous Amelia Peabody mystery series featuring a Victorian era Egyptologist. While I love Amelia, art historian Vicky Bliss is my favorite character written by Elizabeth Peters. Vicky gets swept up in mysteries across Europe and finds herself falling for a dashing jewel thief. (Oh, the romance! And yes, it says something about the stages of life that until I met my husband I never fully appreciated the romantic elements of the Amelia Peabody books, since I couldn't believe that settling down with a great guy could be as romantic as running around with an international jewel thief.)

Aaron Elkins writes the Gideon Oliver mysteries about a forensic anthropologist who solves mysteries all over the world. My parents are anthropologists, so I grew up getting to tag along on research trips like these, but for some reason our real life trips never ended up matching the level of adventure in these books. Hmm... I suppose that was probably a good thing. But I'm glad I've got the books.

Borrower of the Night - The first Vicky Bliss mystery by Elizabeth Peters that takes Vicky from the midwestern college where she teaches to a romp of a treasure hunt at a German castle.

The Crocodile on the Sandbank - The first Amelia Peabody mystery by Elizabeth Peters where Amelia first visits Egypt and must solve a mystery involving a walking mummy who's after Amelia's friend.

The Murders of Richard III - Paying homage to both Josephine Tey and the English countryside house-party murder mystery, in this book Elizabeth Peters takes librarian Jacqueline Kirby to a gathering of a Richard III society who want to prove the 500-year-old king innocent, but they instead find a murderous history repeating itself.

Curses - Gideon Oliver solves the mystery of a supposed curse at a Mayan archaeological dig.
Posted by Gigi Pandian at Tuesday, May 08, 2012 2 comments:

One of the authors who epitomizes this genre is Elizabeth Peters, whose books I have adored since I was a teenager. She stopped attending mystery conventions years ago, but she attended one afternoon of Malice Domestic this year to receive the Amelia award, an award named for her spectacular character Amelia Peabody.

It was a highlight of the convention when I got to meet her! What a lovely, gracious author. When I met up with my friends afterward, I believe I was giggling like I was thirteen years old.

I moderated a Travel Mysteries panel featuring Hilary Davidson, Janice Hamrick, Maddy Hunter, Marie Moore, and Sara Wisseman. These authors have books set around the world in Egypt, Peru, and Europe, so it was fun to hear their travel stories that impacted their fiction. (UPDATE: Marie's husband took a photo of the panel, which I've added below.)


Although panels at conventions are great, one of the best parts is who you meet informally, such as running into Kaye George (a fellow member of the Guppies chapter of Sisters in Crime who was up for an Agatha this year) and Jenny Milchman. If you haven't heard of Jenny's "Made It Moments" blog where authors share their stories about the moment they feel like they've "made it" as an author, you need to check it out. It's one of the most inspiring things you'll read all day.

A couple of my friends arrived late to a panel we had all planned to attend, so I ended up sitting and chatting with Sujata Massey, who writes the Rei Shimura mysteries. I learned she's working on a new book, The Sleeping Dictionary, set in colonial India, that sounds very cool.


In addition to chance encounters, I also planned in advance to meet up with two writers I knew through the Guppies, Kendel Flaum and Diane Vallere. The three of us first got to know each other when we traded works-in-progress. We really liked each others writing, so we decided to embark on a joint project together (more details to follow later this summer). The project has been going great, in spite of the fact that we hadn't ever hung out in person! I had met Diane very briefly once before, and Diane had met Kendel, but the three of were very much virtual friends—until this weekend.


Last but not least, I'm happy to report I finally met Nicole Peeler! I was starting to believe this urban fantasy author was a figment of my imagination. Turns out I was mistaken—she's real! And very fun.


p.s. I played hookie from the convention for a few hours one afternoon to see the gargoyles on the National Cathedral in Washington, DC. I'll post more photos of the gargoyles over at Gargoyle Girl next week.