I'm home from Scotland, where I celebrated my 40th birthday with the writing retreat I envisioned nearly four years ago while going through chemo. (The story behind this trip can be found here.)

I've been pretty good at hanging onto my post-cancer seize-the-day mentality, so I rented an apartment in Edinburgh and invited my local writer's group to join me for a writing retreat vacation. Nearly half of them were able to make it! Rachael Herron, Lisa Hughey, Mysti Berry, and Emberly Nesbitt hopped on a flight to Edinburgh.


I was so happy to discover that we were compatible travelers! We were all on the same page about writing all morning to meet daily writing goals before heading out for adventures exploring the city. I spent most of my writing time plotting a new mystery novel set in Edinburgh.

Writing at the Elephant House Cafe, where I used to study during my junior year abroad in Edinburgh, and where JK Rowling wrote the first Harry Potter book 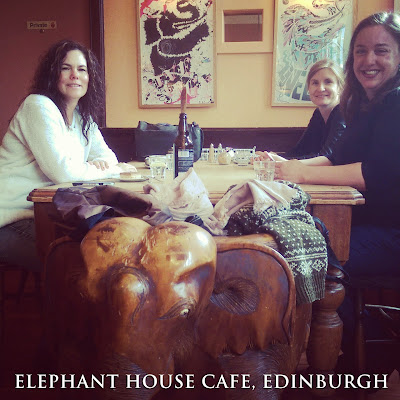 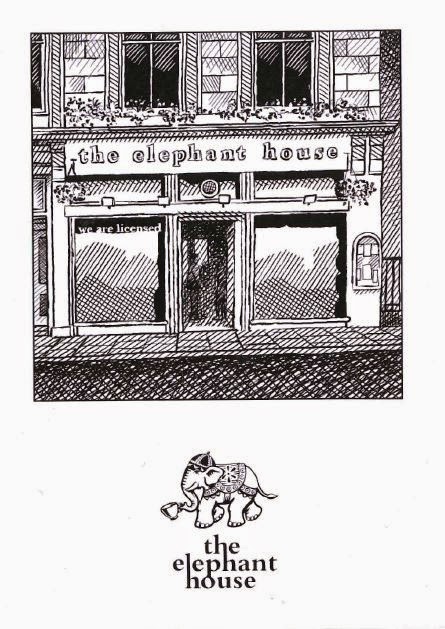 Visiting the Bedlam Theatre, where I performed on stage 20 years ago as a student 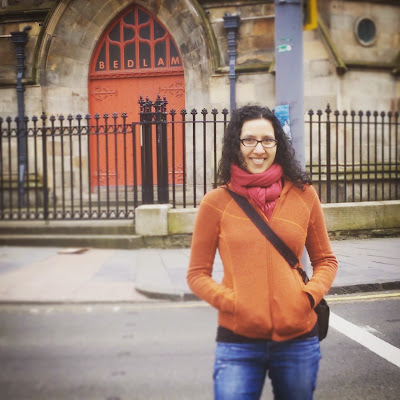 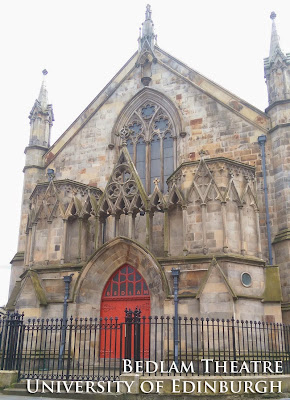 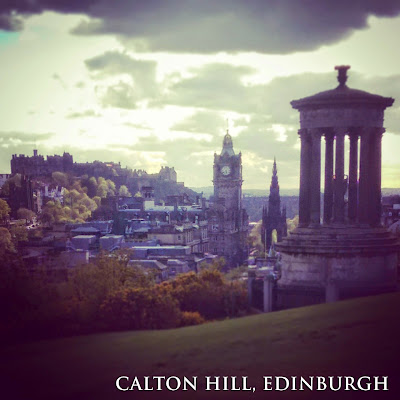 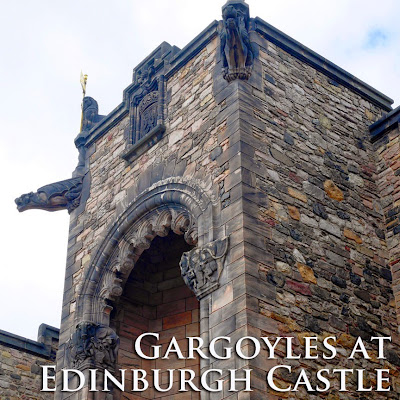 A birthday meal at the Witchery by the Castle 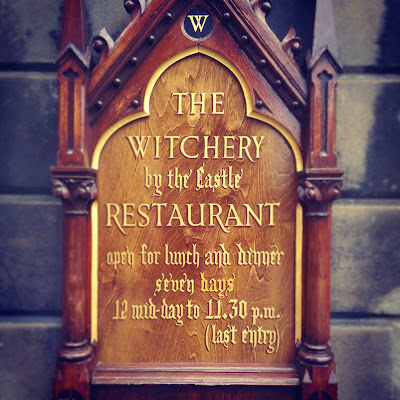 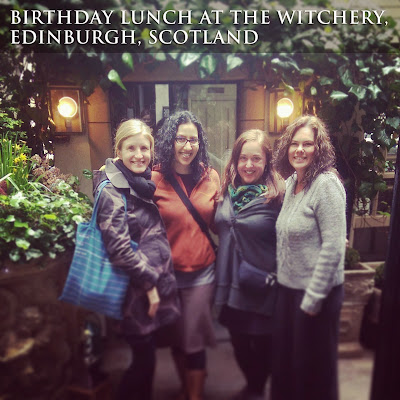 Edinburgh was the perfect city for inspiration for the new mystery I'm writing with ghostly, Gothic overtones! These were a few of my favorite mysterious encounters.

With how much I love puzzle plot mysteries filled with enigmatic clues, it's hard to believe I hadn't previously experienced a live action puzzle escape game. Dr. Knox's Enigma was the perfect introduction to one! 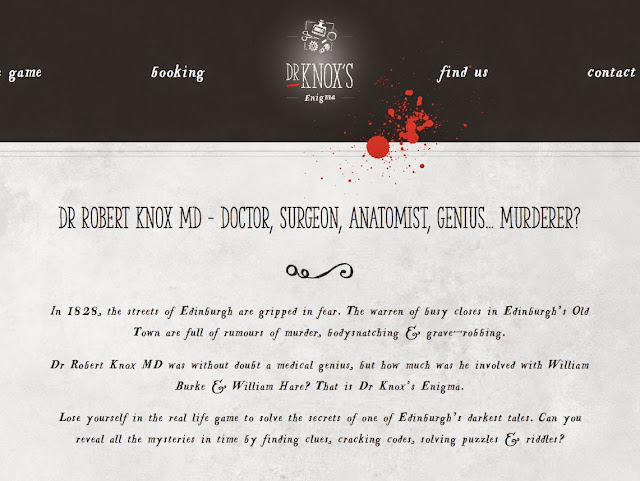 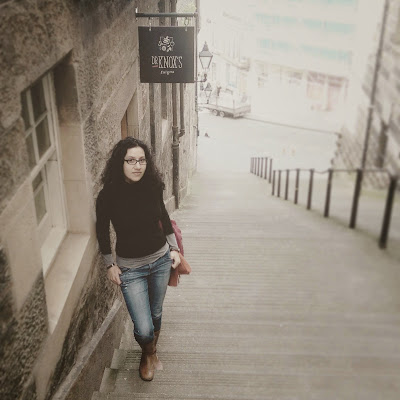 Mary King's Close is one of the tours that takes people underground to explore the centuries-old streets beneath Edinburgh's Old Town neighborhood. The modern day central city is built on top of the dark, narrow streets that once housed the city's poor. (A "close" is a narrow alley.)

Like with Dr. Knox's Enigma, in these underground tours the true mysterious history of Edinburgh is sprinkled with fanciful drama. Fact and fiction merge in ghost stories and with figures wearing the real-life beaked masks plague doctors used to wear to combat disease. 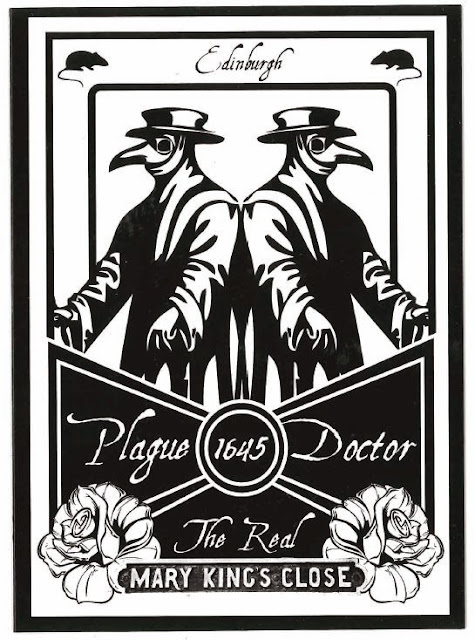 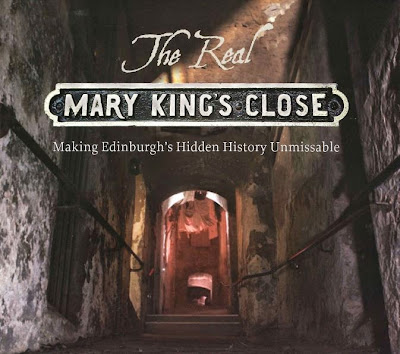 A "kirkyard" is a churchyard / graveyard. Greyfriars Kirkyard is famous for the story of Greyfriars Bobby, the terrier who is said to have spent more than a decade guarding his owner's grave, up until his own death. The faithful dog was then buried not far from his owner. 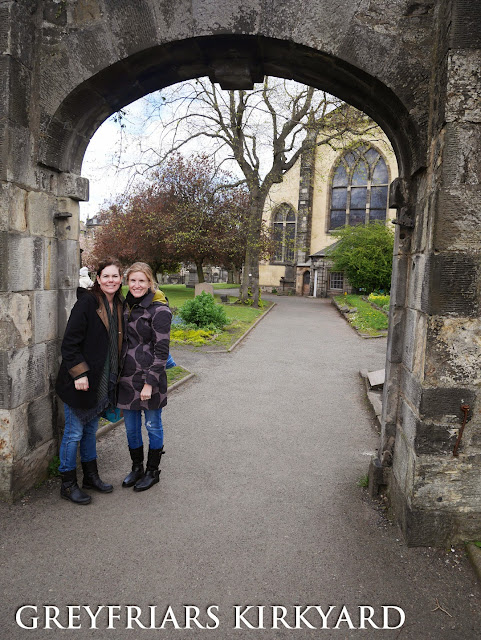 Getting out of town 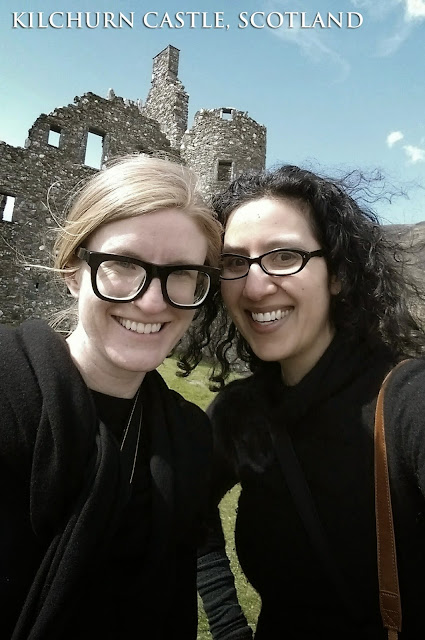 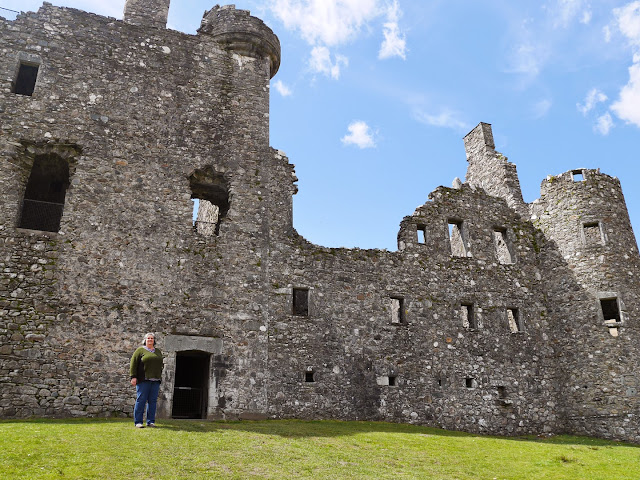 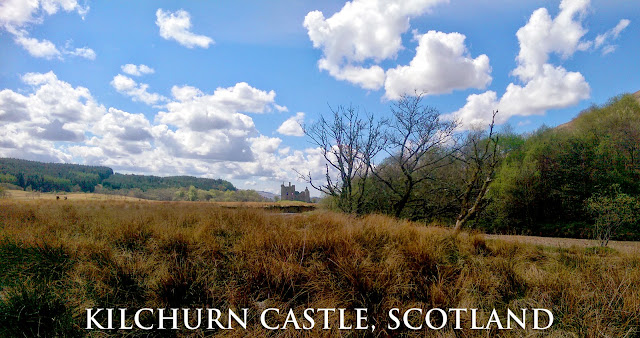 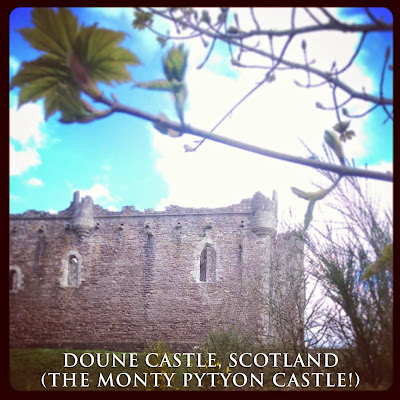 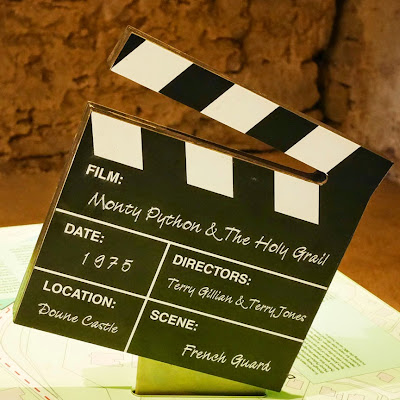 Revisiting the Edinburgh Setting of "Fool's Gold," the novella prequel to Artifact

In 2012, I collaborated with mystery authors Diane Vallere and Kendel Lynn to write Other People's Baggage, a collection of interconnected mystery novellas featuring our mystery series characters (Jaya Jones for me, Madison Night/Mad for Mod for Diane, and Elliott Lisbon for Kendel).

Baggage claim can be terminal. This is what happened after a computer glitch mislabeled identical vintage suitcases and three women with a knack for solving mysteries each grabbed the wrong bag.


The story I contributed to the collection was "Fool's Gold," which takes place in Edinburgh. It's set during the annual Ed Fringe Festival, the huge arts festival that takes place every August. 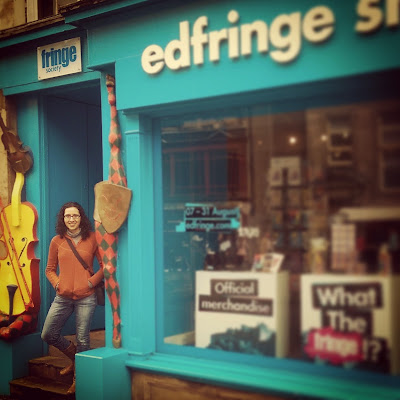 All historian Jaya Jones wants is a relaxing vacation in Scotland before starting her first year teaching college. But when a world-famous chess set is stolen from a locked room during the Edinburgh Fringe Festival, Jaya and her magician best friend, The Hindi Houdini, must outwit actresses and alchemists to solve the baffling crime. 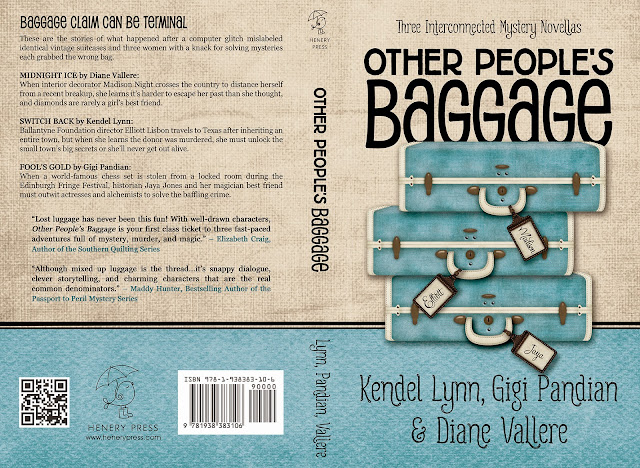 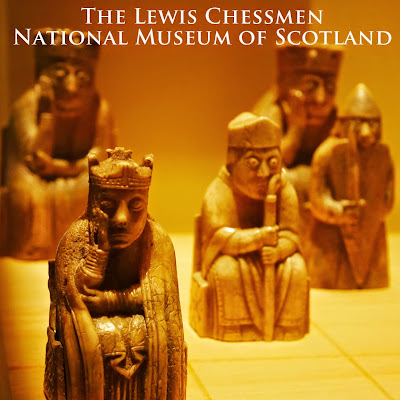 Lest this highlights post get taken over by the fascinating histories of the Lewis Chessmen and the Edinburgh Fringe Festival, I'll do a more detailed post on my "Fool's Gold" inspirations next week!

I'll end with one of my favorite images from the trip 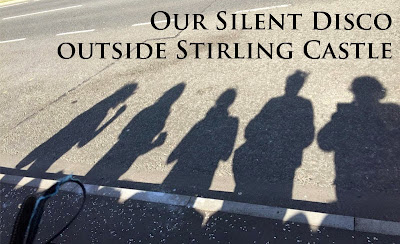 Now I need to come up with an excuse to do this again!

The 27th annual Malice Domestic mystery convention wrapped up yesterday. I attended the traditional mystery convention as both a mystery fan and an author, so between being a fan-girl and putting on my professional writer hat, the three-day event was a bit of a whirlwind.

I'm at the airport, drinking plenty of coffee and green juice to recover from the long weekend, so it's time to share a recap and photos:

The first full day of the convention began with an introduction to Malice for first-time attendees, an informational session for people interested in volunteering, and then Malice Go Round: Like Speed Dating, But With Authors.

There were 20 tables with eight readers and two empty seats; authors paired up and visited each table and gave a 2-minute pitch about their books. I passed out postcards of Quicksand and The Accidental Alchemist out of a magician's hat, since stage magicians are a common element between my two series. (Sorry, I was on California time, so I didn't think to take any photos of the event!)

This year marks Midnight Ink's 10th anniversary, so they hosted the welcome reception with a special cake and books by all of their authors.

Malice Domestic and Sisters in Crime are probably the two most important groups that brought me into the mystery fold. I love connecting with my Sisters at Malice, and at a convention of several hundred, the SinC breakfast is one of the best ways to see everyone.

Don't worry, SinC President Catrina McPherson is left-handed, so a broken arm can't slow her down.


The Sisters in Crime Dorothy Cannell Guppy Scholarship was given out at the breakfast. The yearly scholarship that pays $1,000 for a SinC Guppy to attend Malice Domestic is being offered by agent Meg Ruley to honor her long-time client.
Also announced at the breakfast was the exciting news that the Eleanor Taylor Bland Crime Fiction Writers of Color Award, originally planned as a one-time grant for an emerging writer of color, will continue!

Frankie Bailey and I were involved in the inaugural grant committee last year, when Maria Kelson was awarded the first grant. Her work in progress is terrific.


Wondering about the boas? It was thought up a few years ago as a way for SinC Guppies to easily find each other at the large Sisters in Crime breakfast.

The Sisters in Crime Guppy chapter meets for lunch every year, and it's a great opportunity to put faces to names we know online, in a smaller setting.

The Golden Age of Detection Panel

This was one of my favorite panels. I love Golden Age mysteries, plus check out the lineup of panelists! Mystery scholar Doug Greene moderating, with Ellery Queen Mystery Magazine reviewer Steve Steinbock, author and scholar Martin Edwards, and fiction and non-fiction writer (and Sherlock Holmes expert) Daniel Stashower. I'm tempted to do a recap of the entertaining and informative panel here, but I'd ramble far too long, so I'll post panel notes separately at a later date.

I'm looking forward to reading this new book by Martin Edwards on the Golden Age of mystery fiction that's out this very week. 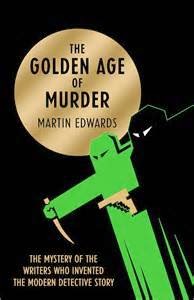 My Sleuthing Duos Panel
I hadn't met fellow panelist Ritter Ames before, and I was happy to learn about her Elizabeth Peters-inspired series. (My to-be-read pile of books grew exponentially this weekend...)

Stepping outside of the hotel to recharge

Green juice run with some of the Midnight Ink crew.

Tulips were in bloom all around the hotel. 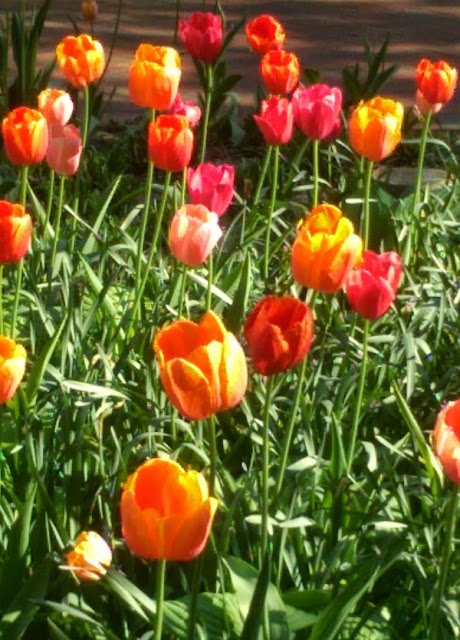 Best Nonfiction: Writes of Passage: Adventures on the Writer's Journey by Hank Phillippi Ryan (ed)
(This is a book full of essays by members of Sisters in Crime.)

Best Short Story: "The Odds are Against Us" by Art Taylor

Sara Peretsky was given the Lifetime Achievement Award this year. Caroline and Charles Todd were the guests of honor, and Ann Cleeves was the International guest of honor.

Closing Ceremonies Tea
There were many hats to be found at the tea. It used to be more of a tradition, and there's a mini movement to bring it back. (I don't yet have a photo of the Henery Press authors with their hats, but I'll add it when I get a copy.)

Poirot and Miss Marple were on hand at the tea, just in case anything untoward were to have occurred.

And now it's nearly time for my flight to Edinburgh, Scotland, where I'm doing a week-long writers retreat with my local writers group to celebrate my 40th birthday. This was an idea I had while going through cancer treatments four years ago, and I can't quite believe it became a reality. But on the heels of Malice Domestic, it's perfect timing. As I type up this recap, I'm reminded again of how inspiring it is to connect with other mystery fans and writers. I'm going to take that inspiration with me to Scotland.