The 2013 Night of Writing Dangerously Write-A-Thon 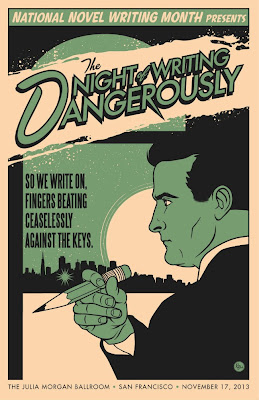 I didn't know if last year's Night of Writing Dangerously could be topped, but this year's National Novel Writing Month write-a-thon was a great night. The event raised money for the Office of Letters and Light, which funds literacy outreach like the Young Writers Program.

In addition to being a good time for a good cause, the evening turned out to be surprisingly productive! In between catching up with other writers and dining on the tasty vegan dinner and donuts (don't worry future NOWD attendees, vegan was only one of many options), I wrote 3,000 words in the next Jaya Jones novel.

San Francisco's Julia Morgan Ballroom was packed with 250 writers for six hours of writing and other shenanigans. Writing is often such a solitary pursuit that the energy of events like this is invigorating. The theme of the evening was "noir," so we dressed accordingly.

Posted by Gigi Pandian at Monday, November 18, 2013 No comments: 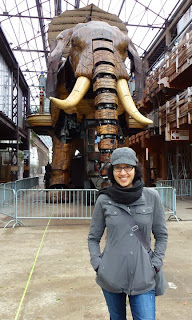 I kicked off my sabbatical with 15 days in France. I wasn't playing hooky from my 100 days of being a full-time writer. True, I'm definitely still in post-cancer seize-the-day mode. But in addition to being a fun vacation, the trip also served a practical purpose as part of my sabbatical: it was a research trip for two books I'm working on right now.

Jaya Jones Book 3 takes Jaya to several destinations in France, a country she's never been to before. And in The Accidental Alchemist, the first book in my new mystery series, American-born Zoe Faust lived in Paris for many years before ending up in Portland, Oregon, and her sidekick Dorian the gargoyle is from Paris. (Dorian is related to my stuffed animal gargoyle Dori, who stowed away in my luggage on this trip.)

While my critique partners are reading a draft of The Accidental Alchemist this month, I'm writing the next Jaya Jones book for NaNoWriMo. I finished an outline for the book over the summer, so this trip was exactly what I needed to fill in some details and get inspired to dive into the book. Here are a few highlights from the trip.

The old shipping warehouses of this port city along the Loire have been converted into a mechanical wonderland based on Jules Verne and Leonardo da Vinci. 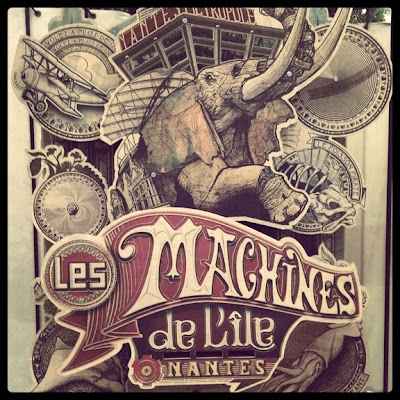 Les Machines de l'ile (The Machines of the Isle) includes amazing creations including the Great Elephant that roams the park, and a carousel straight out of a fantasy novel. If you're into the steampunk aesthetic, you'd love this place. I'd never been here before, but after I stumbled across it last year when researching France, I knew that I wanted to visit and that it had a part to play in the next Jaya book.


No trip to Europe would be complete without a day trip to castle ruins. Clisson is a medieval town not far from Nantes with a wonderful castle. 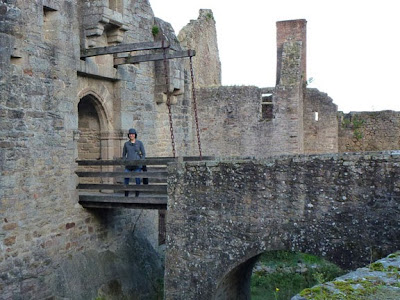 When we arrived at Mont Saint Michel, the small island off the coast of Normandy, it was Halloween and a storm was approaching. That made for an amazing Halloween to explore the cobblestone streets and ramparts as the clouds rolled in.


The storm also gave me a perfect opportunity to kick off National Novel Writing Month on November 1 while sitting inside a cozy hotel room with my paper notebook while the storm raged outside. Our hotel room was a converted fisherman's cottage high on the mount, overlooking the quickly-rising tides.


I first visited Mont Saint Michel when I was backpacking after college and I knew I wanted to return. It's such an amazing place full of history and mystery that it's going to get blog posts of its own -- not to mention being an important part of the book! (One of my favorite mysteries, Old Bones by Aaron Elkins, also has two scenes at Mont Saint Michel.)

Eating out in France is fun, even for someone like me who gave up meat. I enjoyed many meals before we got to Paris, but it was wonderful to rent an apartment and do some cooking! I love going to the markets in foreign countries to try new things that aren't available at home. The shallots in France are heavenly and my favorite snack was chocolate-covered rice cakes. 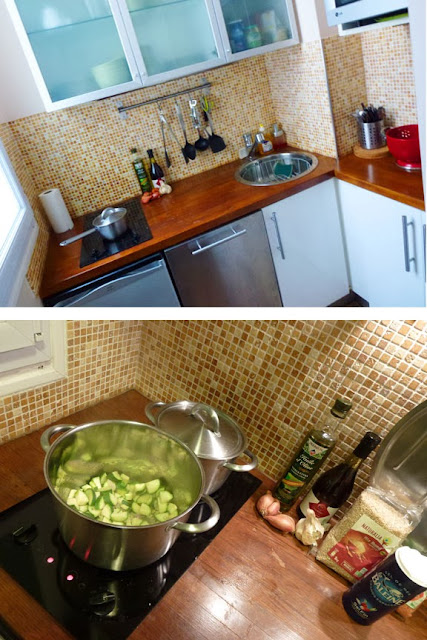 The Louvre is in the new Jaya book, so I visited twice, once during the day and once at night. Nothing as dramatic happened as when I visited in 1998, but it still provided much inspiration.


I stopped by to visit my old friends at Notre Dame. 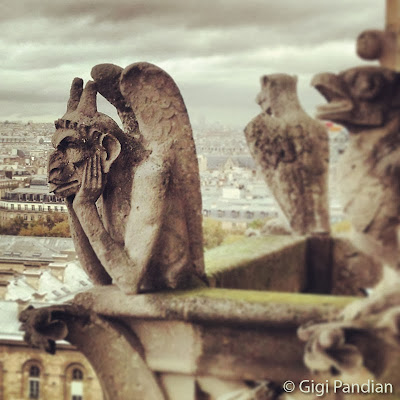 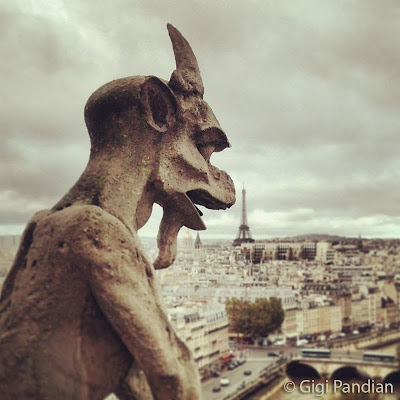 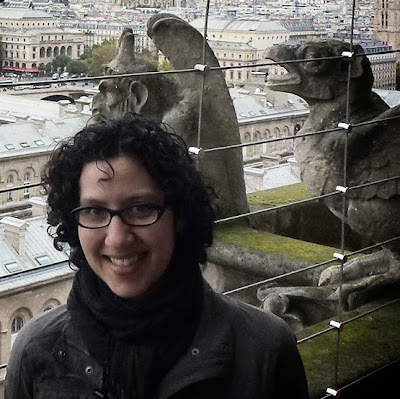 My stowaway Dori had fun, too. (Dori is distantly related to Dorian, the gargoyle in The Accidental Alchemist, but Dori is much fluffier.)

Time to get back to work on those books the trip inspired!

Posted by Gigi Pandian at Friday, November 15, 2013 No comments: