Writers on Writing: The Writing Process 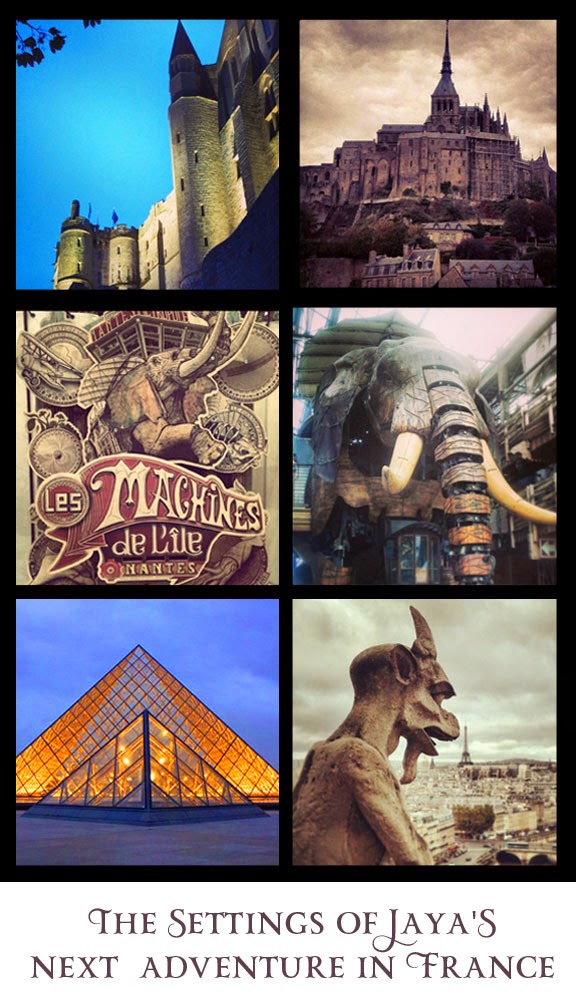 I’m in the midst of a book deadline, but I'm emerging from my writing cave thanks to Diana Orgain, who tagged me to blog about the writing process. It's a topic I love, because I've found that no two writers follow the same process, and I love hearing about how other people do it.

What am I working on?

Jaya Jones Book 3 is nearly done! And it’s close to having a title! (Want to help me pick a title? Click here to weigh in.)

After sending Jaya to Scotland and India, this third book in the series finds Jaya heading from her university in San Francisco to the Louvre in Paris, the quicksand-surrounded castle monastery of Mont Saint-Michel, and the park of fantastical mechanized creatures at Les Machines de L'ile.

How does my writing differ from others in its genre?

Everything I write tends to be a traditional puzzle-plot mystery that's also a fun, globe-trotting adventure with a touch of romance. In my Jaya Jones series and a new book I'm currently plotting, I also write about multicultural heroines. One of the challenges my agent faced in selling my books was that my work didn't fit neatly into any sub-genre.

Elizabeth Peters is the author who epitomizes this style of story, so it’s always a thrill when my books are compared to hers. If you enjoy my books and you haven't read Elizabeth Peters, you must read her books. I hope to one day be as good a storyteller as she was.

I'm sometimes dubbed a cozy mystery writer, because of the lighthearted and humorous tone in my books, and the fact that the books are family-friendly without gratuitous sex, violence, or bad language.

Why do I write what I do?

I grew up traveling around the world starting at a young age, and I fell in love with travel from my very first trip abroad to Scotland at age 10. By writing adventures that bring my American characters to different countries, I'm able to bring my love of travel and a multicultural world to the twisty twisty puzzle mysteries I enjoy.

I’ve loved Elizabeth Peters’ mystery novels since I was a teenager, so when I began toying around with writing, I knew that's the type of story I wanted to write. There’s something about the combination of international adventure, mystery, and romance in her books that strikes just the right note with me. Her books are my comfort food – the books I go to when I've had a bad day and want to curl up on the couch with a book that will make me smile regardless of what's going on around me.

How does my writing process work?

Before I turn to the computer, I do my plotting in a notebook on the train. I have a 25-minute train ride to and from work, which is the perfect amount of time to jot down ideas. I don't know what it is that makes trains so conducive to creativity, but I'm a believer.

Brainstorming on paper before sitting down at a computer is an integral part of my process. Sometimes ideas takes years to germinate, and sometimes they come together more quickly, but the idea is the same. As a visual, tactile learner, I need to make notes and sketches in a physical notebook.

When it comes to the actual writing, I write in intensive bursts. It's for that reason that I love National Novel Writing Month, aka NaNoWriMo, the challenge in which you agree to write a 50,000-word rough draft of a novel in a month. Writing in this manner is a great way to let go of your inner editor and let the story flow out of you. The words can be fixed later. But only if they're there on paper to begin with.

I write not at home but at cafes. At home, there are too many distractions calling to me. At a cafe, I can park myself in a chair across the table from a fellow writer, drink lots of good coffee, not turn on the Internet, and write for a few hours.

I’m now alternating between two mystery series: the Jaya Jones Treasure Hunt mystery series (Henery Press), and the Accidental Alchemist mysteries (Midnight Ink). That's something I didn’t anticipate doing, but it’s turning out to be awesome for my writing process. I don’t work on the two series simultaneously, but instead switch back and forth each time I get to the end of a certain phase of each book – e.g. when I’m done with an outline for a book, I’ll set it aside and work on something different, then go back to it with fresh eyes. After I turn in Jaya Jones Book 3 to my Henery Press editor in early July, I'll take a week off, then dive into Accidental Alchemist Book 2!

Next week, three fantastic up-and-coming mystery writers will answer the same questions I did:

Cindy Brown
I met Cindy through the very cool Oregon Writers Colony, and I’m lucky to have read part of her forthcoming mystery novel, MacDeath. It's a humorous mystery set in the theater world, coming from Henery Press in early 2015.

Cindy Brown has been a theater geek (musician, actor, director, producer, and playwright) since her first professional gig at age 14. Now a full-time writer, she’s lucky enough to have garnered several awards (including 3rd place in the 2013 international Words With Jam First Page Competition, judged by Sue Grafton!) and is an alumnus of the Squaw Valley Writers Workshop. MacDeath, the first in her Ivy Meadows Theater Mystery series, will be published in January 2015 by Henery Press. Though Cindy and her husband now live in Portland, Oregon, she made her home in Phoenix, Arizona, for more than 25 years and knows all the good places to hide dead bodies in both cities. http://cindybrownwriter.com/

Ellen Byron
I met Ellen at the Malice Domestic mystery convention last year, where she was being awarded the Malice Domestic Grant for her work-in-progress. She’s got a long list of TV writing credits, but personally I can’t wait until her first novel is out.

Ellen’s T.V. credits, shared with Lissa Kapstrom, include comedies Wings, Still Standing, Just Shoot Me, and the drama, Young Americans, as well as pilots for NBC, CBS, and Disney. Ellen has written over 200 articles for national publications and served on the Editorial Board for the UCLA Extension Writers’ Program’s books, Inside the Room and Cut to the Chase.  Theatre credits include the award-winning play, Graceland.  Her plays are published by The Dramatists Play Service. Ellen’s first mystery, You Can’t Be Too Thin or Too Dead, won a coveted William F. Deeck-Malice Domestic Grant. http://www.ellenbyron.com/

Mysti Berry
Mysti is one of my local writing pals who inspires me on a regular basis.

Mysti Berry has an MFA, but never lets that get in the way of a good story. She's published two short stories, and is working on a novella for Stark Raving Press and a novel for her future agent, all crime fiction. Mysti lives and works in San Francisco with her husband the graphic novelist Dale Berry. http://www.mystiberry.com/
http://www.pensfatales.com/